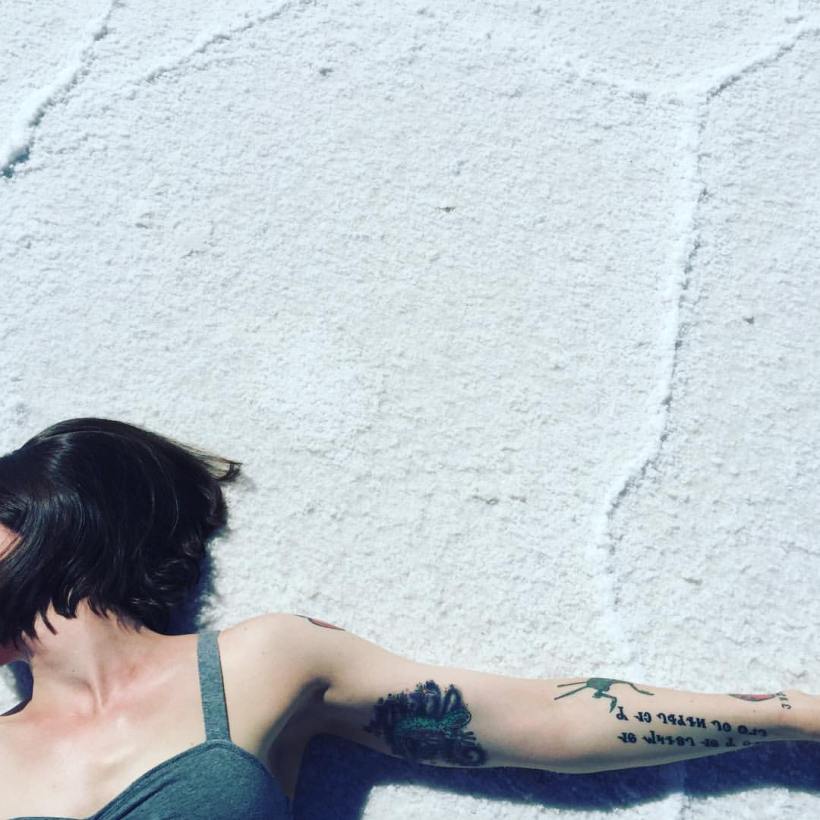 (This post has been updated with a new photograph that better shows the tattoo.)

It says: “I am trying to get as honest as I can,” a direct quote from my brother as he spoke to his final victim, unaware that police were tapped into the line and recording the conversation.

I needed it to be in Deseret Alphabet because it is the alphabet that first made it seem possible to share my story. The very first words I wrote in it:

You see, Deseret Alphabet is phonetic. Translating my brother’s words into it felt like cosmic CPR, giving him the breath of life again.

Translate: verb
1. express the sense of (words or text) in another language.
2. move from one place or condition to another.

Deseret Alphabet is not a foreign language; it is English represented by unfamiliar symbols. I was interested in definition #2: move from one condition to another. I wanted to make the transcript of his incriminating telephone call speak. I wanted to turn it into testimony.

Even though I am not Mormon, I also needed the language to be of this place, Utah, because I truly believe I had to come here, I needed to come here, that it was some kind of destiny. This is the place that set me free.

So how fitting that this tattoo sits just under my Salamander, a tattoo I chose partly for its alchemical symbolism and partly because it evokes Mark Hofmann, the man whose forgeries cracked my heart wide open in spite of his psychopathic intentions. (Weird. Yes, I know. It’s complicated.)

When I bend my arm, the salamander and my brother’s sentence touch but also become hidden, secret.

My arm is a stampless cover.

My arm is a wish.

My arm is a mercury switch.

Literally a mercury switch, all that tainted red ink. In an MRI machine, it would become electric.

While I was getting the tattoo, people asked me what language it is and what it says.

“I’m going to be explaining it for the rest of my life,” I said to my tattoo artist, and he nodded.

Gives a whole new meaning to life sentence, I thought.