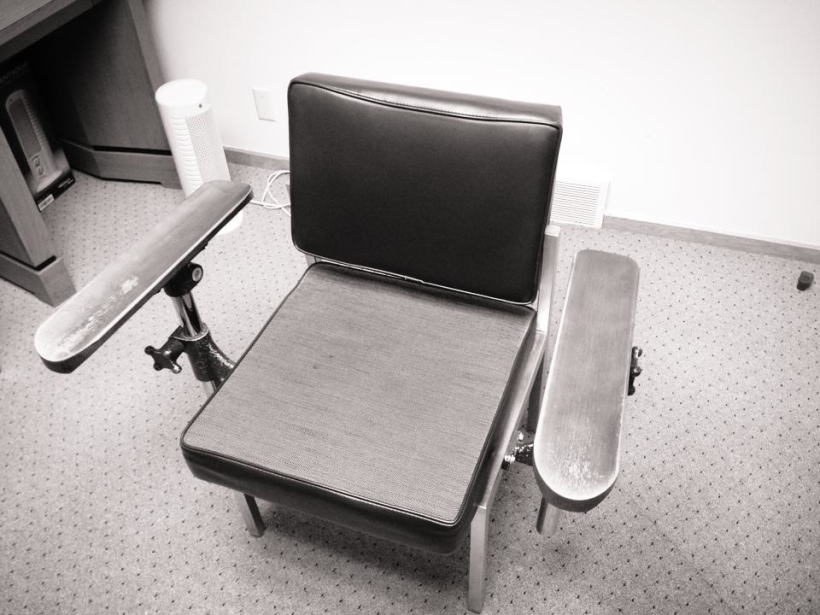 It took a long time to process what happened to me in that cramped basement office where rapists and child molesters get grilled every day for the Utah State Sex Offender Registry. Sometimes, I don’t think I will ever be done processing it. Every time a blood pressure cuff squeezes my arm at a doctor’s office, I am back in that polygraph chair.

A few weeks after the polygraph, I got a chest x-ray for suspected pneumonia and worsening asthma, and as the radiographer explained how to contort my body to net the clearest image, he told me that women’s lungs expand to fill more of the body than men’s do. “Up to here,” he said, tracing his finger across the lower part of his neck.

I flashed back to my polygraph. “More air means truthful,” my examiner said as he wrapped the pneumograph tubes around my ribcage and abdomen.

In asthma, too much air in the lungs is pathological. In the lie detector, it’s the opposite. So should I let out all that air or not?

These intense body memories are sort of a feedback loop, because the lie detector chair felt medical, like all those EEG’s I got as a kid.

Lately, I keep thinking about how the chair seemed designed for male proportions. My arms had to spread wide open to reach its arms. I felt like a little girl–a little girl playing “condemned criminal” in an electric chair.

And that is where everything went haywire.

I remember what my brother did to me in vivid detail but often with no clear story arc: his musk, his Marlboro-Reds flavored tongue, his rose tattoo, his 5’o clock shadow scratching my cheeks. What I can’t do–what I have never been able to do in some cases–is put it together into what came first, what came second, what came last.

The other thing, my most secret shame, is that I almost always transport those sensations to the present tense. Here is a snippet from the chapter describing what happens:

And then it’s like someone jump-cuts the tape, and my brother and I are dry humping on my cheap IKEA couch in Salt Lake City, and he is on top with his work boots hanging over the arm, and his fingers around my ribcage, and I am licking his teeth, and he is still 26, but I am 38, and I am the older one now …

It’s not even like I’m a time traveler observing the past. I am participating, but I am an adult.

I had no words back then for what was happening to me. I did not understand it. So I think when I remember it today, I remember it as a grown up because that’s when I finally did understand. That’s when it became a story. As Bessel A. Van Der Kolk wrote in Psychiatry and Clinical Neurosciences, “It appears that as people become aware of more and more elements of the traumatic experiences they construct a narrative that ‘explains’ what happened to them.”

And here is where neurotypical privilege comes into play. I submitted an excerpt of that chapter for publication, and it was accepted. The first editor and I decided on a cut-off point to shorten it, and it was done. Or so I thought.

Months later, a second editor took over the piece and wrote comments like these in the margins and within the text:

He even added “I imagine” in front of sentences.

I pulled the piece. There was no way I could accept having my abuse memories depicted as “daydreams.” Some of the edits were legit, and I would have gladly done them, but I draw the line at being accused of “daydreaming” my rape as a child.

Getting to define what counts as “real” vs. a “daydream” is a privilege that “normal people” with non-pathologized brains exercise every day.

This process of weaving a narrative out of disparate sensory elements of an experience is probably not all that dissimilar from how people automatically construct a narrative under ordinary conditions.

The only difference is the timeline.

I know my time is out of joint. How the hell do you think I latched onto forgery as the central healing process of my book?

What I want to focus on here is who gets to be the arbiter of it. Because neurotypical privilege does not exist in a vacuum.

My first editor for that piece was a woman.

The second editor who diagnosed my memories as “daydreams” was a man.

After I withdrew the piece, he said he hoped he hadn’t offended me with the daydreams comment, and I think he meant it. I think he was so steeped in his dual privilege–male and neurotypical–that he literally could not understand what he had done. If he was unsure about something, he could have asked for more documents. He could have fact-checked. But he didn’t. Instead, he simply decided what part of my story was “real” and what part was “imagined.”

Would he have called a male veteran’s war flashbacks “daydreams” simply because they defy the timeline by dragging the past into the present: fireworks as bombs, backfiring car engines as gunfire? I doubt it.

Neurotypical privilege + a male-dominated literary landscape makes it very hard to speak about my experiences–to exhale all that truth I am so full of.

And I just keep thinking about that polygraph chair, how it was designed for a man’s proportions. And how many sex offenders have failed that test, but their victims are still diagnosed as “liars.” How my brother was the one who committed a crime, and yet, I was the one taking a polygraph.

And even though my polygraph examiner’s chair was of the ordinary office variety, it seems that men lay claim to that chair, too.