“Really?” My sister responds when I tell her the Cedar Rapids Police mailed me the crime scene photographs. “Photos?”

She means: of our brother’s body?

I never wanted to tell her about the photos. Two years ago, when I got the police report for his arrest, she couldn’t even bear to look at the booking photograph.

My sister isn’t like me. She doesn’t want to see every document, every scrap of evidence, but the photos are different: It’s our brother’s body. Even though she attended his funeral, she never got to see it, either. It matters, seeing the body. I know, because I could never imagine him dead until I did.

“It wasn’t anything I hadn’t seen at the body farm,” I say. “But it’s different when it’s your brother.”

Should I tell her he doesn’t even look dead in most of them? That he crouched on the floor in what police call the fetal position, but which I recognize as child’s pose from my days practicing yoga? That his skin looks as soft and perfect as a baby’s? That I can make out most of the rose tattoo on his left arm?

Should I tell her I have practiced rolling off the couch the way the Medical Examiner said he did? That no matter how expert he was in falling, it’s impossible to land like that? For weeks, my hips and knees bloomed purple.

He got down in that position. He knew he was dying.

Only in the photos where police rolled him over can you see it: the putrefactive decay in his jaw, the fixed lividity in his chest where the blood, no longer pumping, pooled.

In one photo, an officer lifts my brother’s foot to document his polydactylism, meaning six toes instead of five. An identifying feature, like the twisted roots of my molars. The police have to do it, and yet, it seems mean. I glance down at my gnarled toenails — psoriasis toenails, my dermatologist called them — the ones I conceal with thick coats of red or black polish, stabbing the brush into the craters and cracks.

“I will always remember his smirky little smile,” one of my brother’s high school girlfriends told me when I interviewed her. “And his crazy toes.”

That extra toe is an atavism, a genetic throwback to the distant human past. Crazy toes.

If I were there, I would have cradled that foot. I would have squeezed to test for bone or flesh, for in polydactylism, it could be either. I don’t know what to hope for: flesh, because it would decay, leaving him with a normal skeleton; or bone, because my bones are deformed, too.

“It wasn’t really his body that got to me,” I tell my sister. “It was all the little knick-knacks in his apartment.”

Tuned, of course, to NASCAR. My brother was a “woulda been, coulda been, shoulda been” muscle car yahoo until the day he died.

Or the doilies on the end table:

“I get it,” my sister says. “Shows how he got away with everything for so long.”

I know what she means. I always pictured him holed up in a hovel waiting to be convicted. Take the plea, his lawyer had told him. They have too much.

But it wasn’t like that. He went on living. He decorated his home. He bought laundry soap and groceries.

For my sister, it’s enraging. For me, it’s a chance to know him. I know he hung a safari-patterned bed sheet over the window. I know he drank Diet Rite. He used Hefty trash bags and Bounce dryer sheets. It’s more than I knew before. It’s nothing and everything.

But I do not tell my sister any of this. 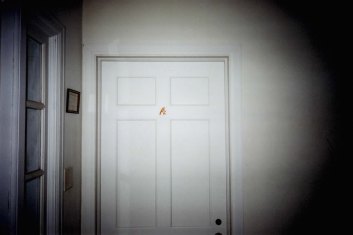 I do not tell her how, every time I take my sleeping pills since viewing the photographs, I dream of knocking on his apartment door, and him answering, a Marlboro Red dangling from his lips. He knows who I am even though he hasn’t seen me in 25 years, and he reaches out his left arm around my waist, pulls me in, presses me against the wall, sticks his tongue in my mouth, licks my teeth like he always did. He doesn’t have to lock the door this time: I am all grown up.

There are other dreams, too. Dreams I do not tell my sister. I am still keeping my brother’s secrets.

He is deader than ever. He is more alive than ever. I am losing sight of the distinction. In my dreams, we can still reconcile.