My second residency in my MFA program, I had a seizure smack-dab in the middle of workshop, right in front of my future new mentor. I don’t know what happened afterward, but I remember thinking I had blown it, that from now on, I would be that girl.

The main reason I had applied to a low-residency program was to avoid seizures getting in the way of my studies. During my undergrad days, I had them all the time. Between poor nutrition due to poverty, lack of sleep due to working many jobs, squeezing in homework at night, constant stress, fluorescent lighting in almost every classroom, and lack of access to neurological care, I didn’t stand a chance. With a low-residency program, I could set my own hours (except during residencies), never miss class, and have seizures under the radar. Nobody would have to know.

I never counted on having one during residency. 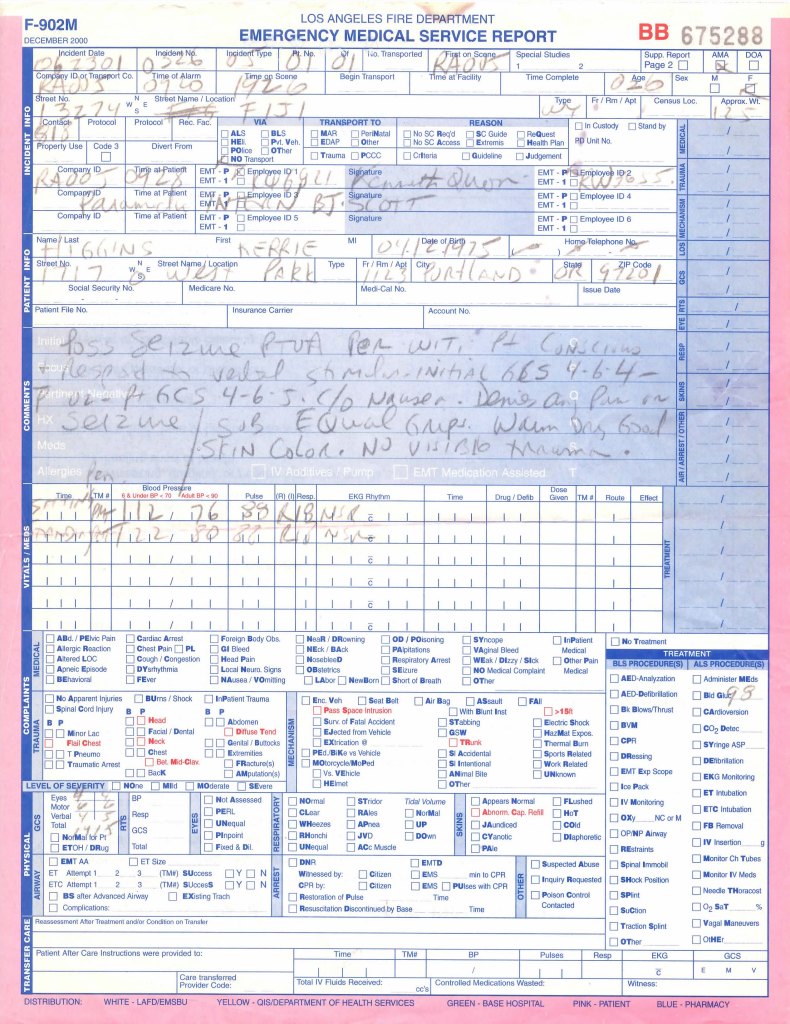 I am struck by the words, “no visible trauma.” It sums up the terror and the problem of epilepsy in three little words: my disability is invisible. During seizures, it becomes visible. Other times, I can “pass” for “normal.”

On the one hand, it’s an advantage because I can slip into the world of “able” people without notice.

On the other hand, slipping into that world means people fail to recognize why I come off a little weird: What do you mean you never learned to drive? Come on, don’t be a party pooper! Stay out all night! Never mind that lack of sleep is a trigger.

Or why I require accommodations: I’m sorry, but it is not fair to the other employees if we schedule you for daytime shifts only. Never mind the unfairness of failing to accomodate. The only fairness that counts is fairness to able people.

So when that seizure happened during workshop, it was game over. I had been outed.

Two years later–on the exact same date, according to my records–it happened again, this time during a senior reading. All I remember of that night is a jumbled mix of images, like individual frames scissored out of a movie reel. I remember being lifted into an ambulance on a gurney and my friend climbing in with me. I remember the paramedic prepping me for a shot–probably Phenobarbital sodium solution or diazepam because I was in & out–and my friend saying, “No.” That’s how we became best friends. I don’t know if the paramedic stuck me, anyway. I don’t remember anything else from that night in the ER. My next memory is conking out in my hotel room alone, afraid of having another seizure.

A few days later, a professor in the program joked that I seemed to only have seizures around one particular professor. “You better stay away from him,” she said. “He makes you have seizures.”

The insinuation was obvious: I had some sort of hysterical crush (that would be a nope). Or maybe I was faking.

I wanted to tell her no. Stress, late nights, not eating right during residencies: all of those things trigger seizures. And besides, I had them at home, too.

Instead, I laughed, pretending to her joke was funny. I was trying to “pass” again, I guess.

At the previous residency, I submitted a piece about my epilepsy for critique, and the responses went like this:

People put the spoon in your mouth because they are trying to help.

Why can’t you understand that seizures scare people?

When people pet your hair, they are trying to comfort you. You shouldn’t feel violated.

Notice none of these comments address the actual writing. Notice the underlying assumption in all of them is that my point of view is not valid; therefore, my essay is not valid. If I want to write memoir, I have got to take care not to challenge neurotypical people.

Never mind that neurotypical people do not bear the same obligation to me.

The critique went on and on and on, and the workshop instructor never stepped in to stop it.

Finally, a friend intervened. “Did you learn something about epilepsy from this piece?” She asked.

“Did you learn what it is like from her point of view?”

Squeamish silence, followed by another student chiming in, the one who thought I was unfair about spoons getting stuck in my mouth: “But I would be more open to learning it if she would take into account my feelings.”

Back then, I lacked language for what was happening, but now I know what to call it: ableism. And this happened in a progressive MFA program that not only touts its commitment to social justice, but also advertises it as the main thrust of the program.

In other words, even “progressives,” even “liberals,” even people committed to social justice, can be biased and bigoted.

I wish I had possessed the language back then to call my peers out on their bullshit, but I didn’t. All I had was this sick feeling in the pit of my stomach. They telegraphed their message loud & clear: I had to “pass” and “represent” people with disabilities at the same time, like some kind of quantum voodoo, existing in all possible states at once.

Thanks to my friend intervening, I felt empowered to shrug off the ableist critiques. I revised that essay, but on my own terms. And then I published it. You can read it right here: State Lines.

What I’m saying here is that allies matter–whether it be against ableism, homophobia, racism, transphobia, sexism, or any number of oppressive -isms. Speaking up matters. Do it.

6 thoughts on “no visible trauma: on invisible disabilities and MFA programs”