People explain my tattoos to me.

You are taking back your body, they say. But they are wrong. I am donating my body. I am casting a tattoo magical resurrection spell to save my brother’s soul. I am not ready to go into the specifics of the alchemy, chemistry, epigenetics, theology, theodicy, and psychogeography that led me to body modification, but I will share a little glimpse of the process here.

My first tattoo was a replica of the Salt Lake City temple doorknobs, minus the words “Holiness to the Lord” because the artist felt they would crowd the image–and I agreed. It was also truer that way: I am a Gentile, a non-believer, forever on the outside here in Utah. To mark myself in this way, with a holy Mormon symbol, to claim it for my condemned body, is somewhat radical, especially since the LDS Church officially prohibits tattoos. I felt the exclusion of “Holiness to the Lord” reflected the complexities of me needing this image on my body.

I also love my mole that interrupts the ink. When my tattoo artist finished, he apologized that he couldn’t ink the mole. I said, “No. I love it.”

I think it looks like a little bee buzzing around the hive.

But know what I love the most? The reminder that my skin is living vellum. If you have ever studied Medieval manuscripts, you know that flaws in the vellum could result in some interesting issues for the scribes — writing around holes being my most favorite. Here, the artist has written around a flaw in my vellum. 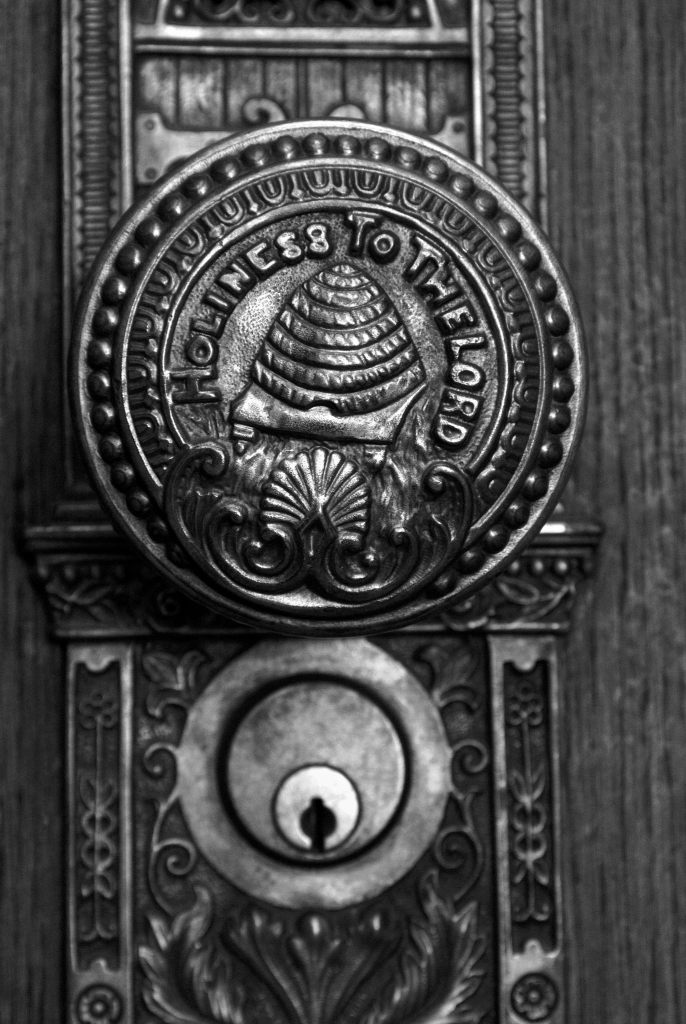 My second tattoo reproduced my brother’s rose on his left delt. I could not obtain a picture of his rose (and the process of trying to track one down is a story in and of itself), so I found a rose I liked instead. A Tudor rose. In Masonry, this rose is a symbol of resurrection. It also comes with alchemical symbolism.

Some people remarked when they saw this photograph that something had changed in me. It was a side they had never seen–sensual, even perhaps trying to be sexy. I thought that was interesting, given the reasons for this tattoo. It sparked some soul-searching for me. I realized it was true. I do feel more sensual after getting this tattoo. The reasons are complex, and I will share them some other time, perhaps in an essay.

This tattoo specifically seems to incite a lot of commentary among those who know why I got it. Why would you mark yourself with your brother’s tattoo? Are you trying to say you are not afraid of him anymore?

But I was never “afraid” of him. And no, I am not sending a message or making a statement of independence or freedom. Like I said, I am doing something far more radical: trying to save his soul–and not only that, but doing it without membership in a faith. (More on that in future writings)

Here is how the tattoos look from the front. Notice the symmetry? I love that!

Directly below the temple, I got a falcon. As you know, I have been involved with rescuing fledging falcons on Temple Square in recent years. That experience has been healing for me, because it is the one time I feel welcome on Temple Square, like I really have a home here. And you know, I feel an affinity with falcons because they symbolize unconverted Gentiles. 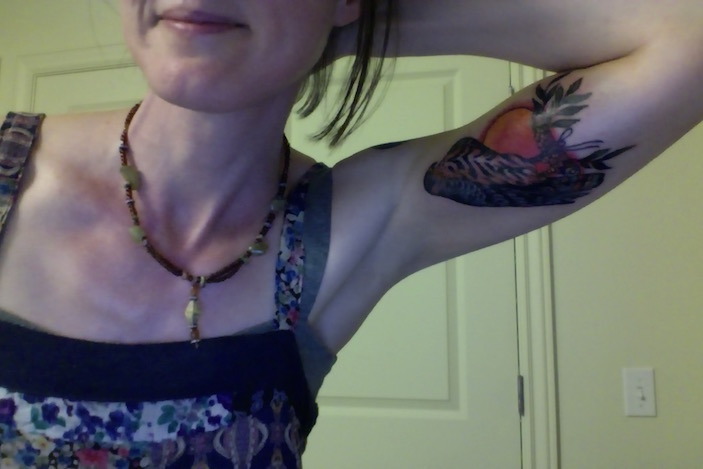 I also love how the falcon is seated: in alchemy, a seated bird indicates that an alchemical operation is underway.

Directly below the rose, I got a salamander, which carries so much symbolism, too: in alchemy, resurrection, because the salamander can survive fire. To St. Augustine, the salamander proved that souls could burn for eternity and not be consumed–again because ancients believed that salamanders survived fire. There is also the symbolism associated with Mark Hofmann, who is a huge part of my book-in-progress.

And on my wrist: the Doomsday Clock. It says 3 to midnight in Deseret Alphabet, because the Doomsday Clock is at 3 minutes to midnight right now and also in 1984, a crucial year in my book-in-progress. My tattoo artist called it “permanent party time,” and I love that. Notice how if I bend my arm, I can bring the “end of the world” to “resurrection”: death and resurrection meet, like live electrical contacts.

I got the Doomsday Clock tattoo on the anniversary of my husband going into the hospital due to extreme stress, an event that set our personal Doomsday Clocks in motion, the end of our time here in Utah. It happened totally at random because I got sick and had to postpone the tattoo. The artist said, “Will a few weeks from now work?” And it landed on that date. I didn’t even realize it until later. Perfect.

More on my tattoos in an upcoming essay, but maybe this post answers some questions. Maybe not. I know I am being a bit cagey, but it’s because I feel a strong need to protect myself as I continue on this journey. I will say this: the magic spell is working.

People explain my tattoos to me. Soon, I will explain them to you.

5 thoughts on “people explain my tattoos to me”